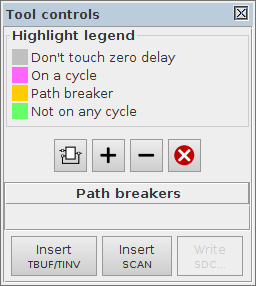 By default the produced SDC file uses the names of gates and pins as they are defined in the Property editor for the corresponding nodes. If necessary, these names can be substituted by providing a conversion file in Edit→Preferences…→Models→Digital Circuit preferences via Substitution rules for export setting. For example, libraries/workcraft-tsmc_ghp.cnv file has rules to convert librarys/workcraft.lib gates to match the naming convention of TSMC GHP library. This is a convenient way to convert a circuit (and its constraints) mapped into one gate library to be used with another library.

tool. Most of the gates are highlighted magenta indicating that they belong to some combinational cycles:

If we would pass this circuit to a static timing analysis tool, it would likely disable the timing arc in gate OUT_BUBBLE15 to eliminate all the cycles. While this is may look like an optimal solution, unfortunately it also removes many important timing paths, e.g. one would not be able to measure the critical delays from dsr and from dsw to lds. Therefore, other methods of dealing with combinational cycles are required.

As a first exercise, experiment with tagging input pins in VME bus controller as path breakers, trying to eliminate all the combinational cycles. At the same time make sure to preserve all interesting and important timing paths.

For example, if we assume that feedback loops are always short and do not require timing analysis, then the self-loop input pin of gate U17 is an obvious candidate for breaking a cycle. The input of U16 that is driven by a zero delay inverter is another candidate for path breaking as it is not on a critical path. (Alternatively the timing arc in the preceding zero delay inverter can be disabled.) Click both these input pins to set their Path breaker property. The result should look as follows:

It may be tempting to tag the remaining pin on the cycle in gate U16 as a path breaker, and this indeed would eliminate all the cycles. However, this would also break an important path from d to lds while, according to the specification of VME bus controller, d is a trigger of lds (see the causality arc d+→lds+ in the STG below):

Instead, consider input pins in gates U1 and U5 that are on a cycle. These are driven by context signals as all the triggers of output d are primary inputs of the circuit. Therefore the timing paths through this arcs are not critical and the timing arcs from these pins can be safely disabled – click both pins to set their Path breaker property. Now all the gates are highlighted green indicating that there is no more unbroken combinational cycles in the circuit:

The information about disabled timing arcs can now be exported as a set of SDC constraints for subsequent use in the conventional EDA tools – click on the Write SDC… button and save the constraints in vme-tm.circuit.sdc file, which will be as follows:

Let us now use a different approach to loop breaking and insert testable buffers in every combinational cycle. For this, activate Cycle analyser

You can also rely on the automatic loop breaking: press

for eliminating all the remaining cycles or

Interestingly, setting Path breaker property for the output pin of a single gate U17 is sufficient to eliminate all the combinational cycles:

Now insert a testable buffer at the output of U17 by pressing Insetr TBUF/TINV button:

Usually a custom SCAN insertion script is employed at this stage for replacing TBUF and TINV gates by specialised SCAN-enabled components and arranging them into the SCAN chain. A basic alternative to such procedure is implemented in Workcraft. Pressing the Insert SCAN button automatically creates the SCAN chain following a sequence of steps (the names of SCAN ports and pins can be changed in Edit→Preferences…→Models→Digital Circuit preferences):

The final VME bus controller with SCAN should look as follows:

Note that disabling timing arcs and generation of SDC file can be combined with insertion of testable elements if necessary.

Insertion of testable buffers and SCAN should not break the circuit. This can be verified in a usual way via Verification menu using the original STG as the environment for the modified circuit – all the standard verification properties, namely Conformation, Deadlock freeness, and Output persistency should pass.

Note that the will be warnings about unused scanout output and about dead places associated with scanck, scanen, scantm, scanin ports. Both warnings are expected and can be safely ignored. Indeed, the behaviour of SCAN output is not specified in the mission-mode STG, and all the SCAN input ports are intentionally forced low, i.e. their Init to one property is unset and their Set function is assigned to constant 0.