Investigation of crime and accident scenes with Structured Occurrence Nets

In this tutorial we show how to use Structured Occurrence Nets formalism for modelling and analysis of crime and accident scenes.

The model consists of three occurrence nets (groups) with each represents the behaviour of individual party. The behaviours of traffic light is captured by Traffic light group. The conditions represent different states of the traffic signal, i.e, Green, Amber, and Red. The groups Vehicle A and Vehicle B model the behaviours of two collided cars. Vehicle actions are modelled with Approach, Accelerate, Cross light and Crash events.

The two Crash events are in a synchronous interaction, indicating that they occurred at the same time. The dependency between Traffic light and Vehicle A are captured by behavioural relations. It intuitively means that, for instance, the traffic light was in a red color when the car crossed the light and crashed with the other one.

SONs structural properties can be verified using structural verification tool. It's important to do the verification before any further analysis. Otherwise the result may be incorrect.

The user can invoke verification by selecting Tools→Verification→Structural properties. In setting dialog: 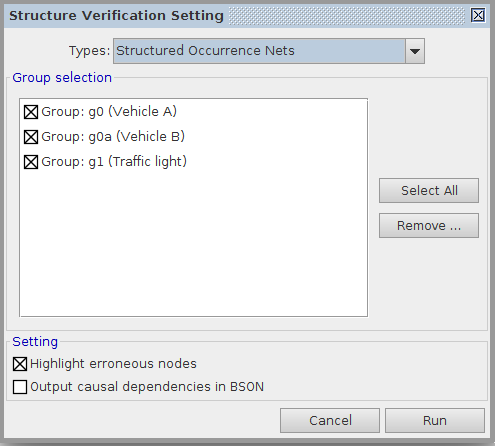 To simulate the model, press the

button. The initial marking will be automatically set. and all of the enabled events will be identified by being coloured orange. Clicking on any enabled event causes tokens to move, event colouring to be updated, and the simulation record augmented.

The Crash events are in synchronous iteration. They will be enabled at the same time. Click on any of them causes two events occur simultaneously.

Reachability checking establishes whether a given marking (a set of marked conditions and/or channel places) can be reachable at the same time from the initial marking. To perform the checking, double click on condition/channel place or use property editor to mark some nodes. Then select Tools→Verification→Reachability.

The model describes the behaviours of a suspect car monitored by police investigator. At 9:00 am, the car was spotted at Central Station by traffic camera. Then, at 10:00 am, the car appeared at Ashington. However, there is no future information captured by camera between 9:00-10:00. Assuming there are two roads that the car can take to Ashington. In order to analysis which road did the driver actually take, the investigator has to make hypothesis． In SONs model, such hypothesis can be represented using alternative behaviours and time information.

The condition At Jesmond has two output events Takes A189 and Takes A1068. It intuitively means that the car driver can either takes road A189 or A1068. Each of them belongs to different scenario. For each scenario, we can give estimated duration coming from empirical data. For example, the duration value D:0030-0040 implies that it will normally take about 30 - 40 mins if the drive choose road A189. 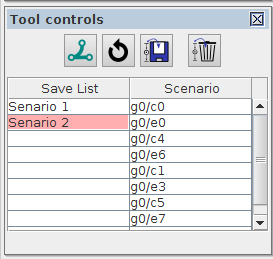 Once we complete the model, it's possible to analyse which scenario (road) did the drive most likely take using the specified time information (provided by traffic camera), estimated durations (from empirical data), and causal relations (provided by SONs model).

To perform such analysis: 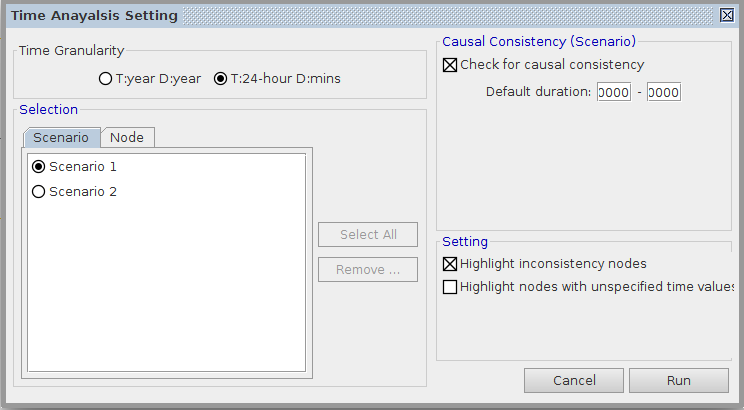