In the exercises below you will use Signal Transition Graphs (STG). STGs are Petri nets where actions (i.e. transition labels) have some extra semantics and short-hand drawing conventions are used:

The aim of the exercises below is to model a system that guarantees Distributed Mutual Exclusion (DME). There are N clients that should access a shared resource in a mutually exclusive way. To do that, N almost identical DME elements are connected in a ring. The first DME element is slightly different from the others in that it initially holds a “token” (do not confuse with Petri net tokens). This token is passed around the ring in the clockwise direction.

A request from the client may arrive when the DME element is about to pass the token to the next DME element in the ring. Hence, the DME element has a choice: it can either grant the request holding the token for longer or to pass the token and grant the request on the next round – either behaviour is acceptable. This choice expresses arbitration, as the DME element arbitrates between the client’s request and the decision to pass the token – which of them was first. If these events happened close in time, an arbitrary decision is made. If the system is to be implemented as a circuit, it will inevitably enter a metastable state from time to time, and so one has to use a Synchroniser, a Mutual Exclusion element or similar specialised circuitry that can handle metastability.

The sequence of events req+, grant+, req-, grant- forms a so called 4-phase handshake – this is a very common mini-protocol in asynchronous systems.

The advantage of this Token Ring architecture is that it can be implemented in a distributed way.

Model a DME system comprised of two DME elements. Start by creating STG models of two DME elements as shown below. These two models should be saved in separate files, and you could use copy-and-paste to reduce the amount of work. Note that the names of the actions are slightly different in these two STGs (to make them unique), and that the initial markings reflect that the first DME element holds the token while the second does not.

Directional actions (i.e. those with + or -) are used to interface clients, whereas passing of the token between DME elements is modelled abstractly by undirected (i.e. ~) actions (these actions could be implemented by handshakes when the model is refined, but this is not required for this exercise). When place CS1 or CS2 is marked, the corresponding client executes its critical section. Note that short-hand notation is not used for these places, as they have special significance to the designer.

Note the choices between outputs, e.g. in the first DME element place token1 is in the presets of grant1+ and move1to2 transitions. Such choices are usually due to arbitration, and lead to violation of Output-persistence – a circuit implementation would have to handle metastability, as explained above.

These two DME elements communicate by executing shared actions moveXtoY. Hence, the model of the overall system can be constructed compositionally, using the parallel composition operation. This functionality is accessible via the Tools→Composition→Parallel composition [PComp] menu. In the dialog window (see below) tick the names of the files to be composed, and select Outputs / Make dummy. The latter will turn the fused transitions into dummies, as they represent internal workings of the system. For this to work files dme1.work and dme2.work must be opened in the same instance of Workcraft. 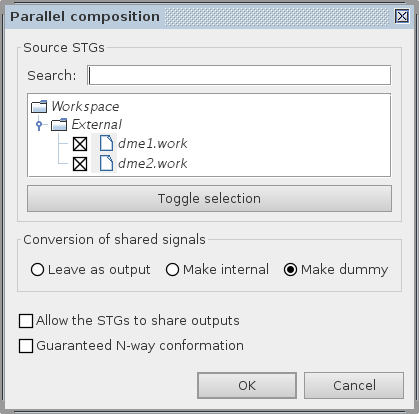 The resulting STG model of the system should appear in a new tab. It is also shown below, after some manual editing to improve visual representation, in particular:

Simulate your model. Try to re-create the following scenarios:

Verify the following standard properties of the model:

Verify the following custom properties of the model. Note that the tool checks if there is a reachable marking satisfying the provided Boolean expression. Hence, to check an invariant (i.e. a property that must hold in every reachable state of the system) you have to express its negation as a Boolean expression, and let the tool check that no reachable marking satisfies this expression. Do not forget to save the properties with appropriate names.

As noted in the previous exercise, the STG has redundant places and can be simplified. Use Conversion→Net synthesis [Petrify] to obtain the following simplified STG (manual layout was used to make it look similar to the previous STG):

One can also contract the dummy transitions without changing the behaviour of the system, as they correspond to hidden internal actions – use the Conversion→Dummy contraction [Petrify] menu item. This completely hides the internal implementation of the system, as well as its distributed nature, leaving only its visible behaviour: The whole DME system is now abstracted to a single place controlling handshakes with the clients.