Verification and synthesis of hierarchical designs

In this tutorial we revisit the hierarchical buck converter to verify the conformation of its modules and learn how their parallel composition can be used for verification of system-wide properties and (sometimes) for deriving a better circuit implementation.

Hierarchical design of a buck controller

Let us start with the following decomposition of the design described in hierarchical buck converter – here the CHARGE module is further decomposed into CHARGE_GP and CHARGE_GN communicating with the help of an extra signal pass:

WAIT and WAIT2 are predefined elements from the library of Asynchronous Arbitration Primitives.

The behaviour of the CYCLE module was explained in the hierarchical buck tutorial and is captured by the following STG:

A charging cycle of a buck has two distinctive phases:

The STG specifications of CHARGE_GP and CHARGE_GN are as follows:

All these STGs can be verified and synthesised separately. However, it is possible to assemble an incorrect circuit from correct modules; the main focus of this tutorial is to verify and optimise the specification of the overall system.

Let us verify N-way conformation for the modules of the buck controller. Capture or download the STGs for CYCLE, CHARGE_GPs and CHARGE_GN modules and save them as cycle-mutex.stg.work, charge_gp.stg.work, and charge_gn.stg.work, respectively. Open these three STGs in Workcraft and verify this property via Verification→N-way conformation… menu. In the N-way conformation dialog select the STGs of all the system modules as follows: 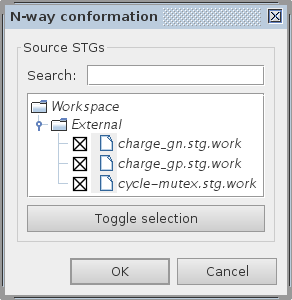 As an experiment, change one of the module interfaces, e.g. swap polarity of chrg_ack output in the CHARG_GN (by right-clicking the transitions of this signal and selecting Mirror transition sign in the pop up menu). Note that now each individual module still passes all the standard verification checks, but the overall system is wrong, as CHARG_GN and CYCLE do not agree on the initial value of chrg_ack. Repeating the verification of N-way conformation now yields a violation trace, together with the name of offending signal:

Note that if  Play  button is pressed, then Workcraft automatically switches to the module STG that produces the unexpected output and initiates its simulation with the reported violation trace.

N-way conformation is checked for all the modules in one go using their parallel composition. The violation trace of the composition is then projected to each module, and the module's state after the projection trace is then checked for any unexpectedly enabled output events, i.e. those events that are enabled in the module but not in the overall composition. If such an event is detected then the module does not conform to its environment. In the above example, output chrg_ack- becomes unexpectedly enabled in CHARGE_GN after the following sequence of events: pass+, gn+, gn_ack+, zc_ctrl+, zc_san+, gn-, gn_ack-.

In larger designs debugging a violation of N-way conformation is a daunting task due to a large number of modules and complicated interaction between them. Hence Workcraft reports some extra information about the violation trace in the Output pane. The user can choose one of three possible reporting styles using Edit→Preferences…→External tools→MPSat verification→Report style for conformation violation setting.

By default the violation trace is reported as a Table with projections of the trace on each module, one column per module (see the example below):

Another reporting style is List showing the events of the violation trace of the composition, with the names of the modules participating in executing this event (see the example below):

Finally, Brief report style shows a 'raw' violation trace of the composition, its projections on each module, and the offending signal transition:

System decomposition into manageable modules is paramount both for comprehension by designers and for efficient speed-independent implementation by synthesis tools. As long as interface conformation is preserved, the designer can focus on optimisation, verification, and synthesis of individual modules. However, verification of system-wide properties may require crossing the module boundaries, and to accomplish this the parallel composition of all the modules need to be constructed.

The dialog should look as follows: 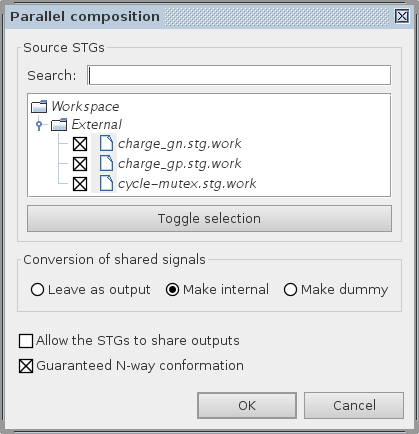 Press the   OK   button to compose these STGs – the result should look similar to this:

If you did not tick Guaranteed N-way conformation option, then the composed STG may have some redundant places (sometimes implicit within arcs). These places can be removed by resynthesis via Conversion→Net synthesis [Petrify] menu or individually, after checking their redundancy via Check place redundancy popup menu.

Verify the composition STG using Verification→Consistency, deadlock freeness, input properness, output persistency, and mutex implementability (reuse unfolding) [MPSat] menu (see standard verification properties for details). All these properties must hold for the specification to be implementable as a speed-independent circuit.

For our buck example one must verify that PMOS and NMOS transistors are never ON simultaneously (which would lead to a short circuit). Violation of this custom property can be formulated as a reachability analysis problem using Reach language (see verification of a basic buck controller for details): ($S"gp" | $S"gp_ack") & ($S"gn" | $S"gn_ack"). This property refers to signals of several buck control modules, therefore it has to be checked on the composition of modules.

Let us verify the absence of a short circuit in the composition by defining a new custom property via Verification→REACH assertion [MPSat]… menu. Enter the above Reach predicate in the REACH assertion dialog. Note that the MPSat mode must be set to STG reachability analysis and the predicate must be unsatisfiable for the property to hold: 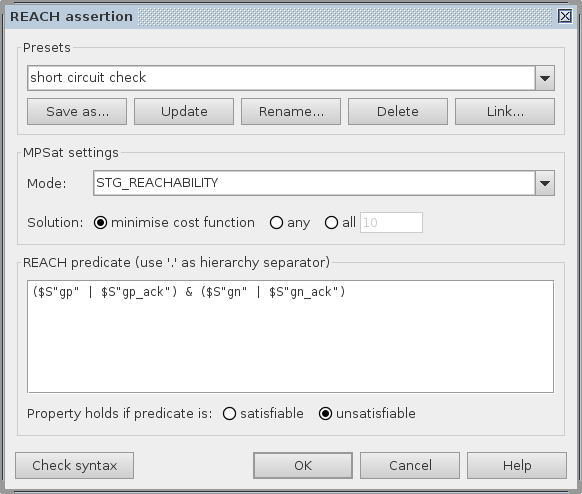 Pressing the   OK   button should confirm that the property holds, i.e. no state is reachable that satisfies the short circuit predicate.

Synthesis of the composition

One of the important advantages of hierarchical design is that the modules can be synthesised separately. However, sometimes one can improve the implementation of the overall system by doing cross-boundary optimisations. This is done by composing several tightly coupled modules and synthesising the resulting STG. This may occasionally result in a better circuit because:

Another problem is that Logic decomposition and technology mapping are much more difficult for large STGs.

Let us evaluate the benefits of cross-boundary optimisation for the buck controller. In the composed STG chrg_req, pass, and chrg_ack used to be the inter-module communication signals, and therefore may be redundant in the composition. However, chrg_req is also a mutex output and thus has to be preserved to satisfy the mutex protocol. Therefore, only pass and chrg_ack can be hidden. Select transitions of these two signals (one transition per signal is sufficient) and these signals via the Conversion→Net synthesis hiding selected signals and dummies [Petrify] menu. The simplified STG should look similar to this (note that place me was renamed to p0 by Petrify, but its Mutex tag was automatically restored from the context – in general this is not always possible and might be necessary to do manually):

Verify the obtained STG for the standard speed-independent implementability properties via Verification→Consistency, deadlock freeness, input properness, output persistency, and mutex implementability (reuse unfolding) [MPSat] menu. Then proceed to the technology mapping, e.g. using Petrify (relying on its automatic CSC conflict resolution) – Synthesis→Technology mapping [Petrify] menu (by default gates from libraries/workcraft.lib are used; this can be changed under Gate library for technology mapping option in Model→Digital circuit preference that is accessible via Edit→Preferences… menu).

The area of the resultant circuit (reported via Tools→Statistics→Circuit analysis) is 220 units + MUTEX. For comparison, when the controller modules are synthesised separately, the total area would be 256 units + MUTEX (16+MUTEX for CYCLE, 120 for CHARGE_GP, and 120 for CHARGE_GN), i.e. 14% reduction.

Note that even better results can be achieved by other optimisation techniques, such as concurrency reduction. For example, consider the reset phase of the WAIT elements in CHARGE_GP and CHARGE_GN modules. The reset of WAIT element is just a single gate delay and does not depend on the environment delay. It is quite reasonable to assume this would usually happen faster than switching a large power regulating transistor. Therefore, without sacrificing performance, one can reduce the concurrency of WAIT reset as follows:

This concurrency reduction significantly simplifies the implementations of CHARGE_GP and CHARGE_GN, down to 60 units, so the area of the whole controller is reduced to 136 units. Using the composition technique the area can be further reduced down to 128 units (equivalent to removing a single inverter).

To conclude, hierarchical design is the recommended method for designing controllers with more than a handful of signals. This tutorial explained how to verify system-wide properties of such designs. The simplicity of synthesising individual modules (compared to synthesising the overall system) is a very important advantage of hierarchical designs, making the process much more predictable. Moreover, if cross-boundary optimisation is desirable, one can always automatically derive the STG for the overall system by composing the modules and hiding the inter-module communication. The resulting large STG is likely to be challenging to synthesise, but so would the monolithic specification of the overall system if one did not use the hierarchical approach.

All STGs and circuits (48 KiB)