C-element is a latch that synchronises the phases of its inputs. A symbol for a 2-input C-element and its timing diagram are shown in the figures below. Initially all the signals are in the low state. When both inputs in1 and in2 go high, the output out also switches to logical 1. It stays in this state until both inputs go low, at which stage the output switches to logical 0.

Note that the output of C-element is not fully determined by its inputs: When the inputs have different values the output keeps its previous value, i.e. it can be either 0 or 1. That is, C-element is not a combinational gate, but a latch with internal memory.

Let us model the C-element behaviour using the Signal Transition Graph (STG) formalism. Create a new STG work and translate the sequence of events in the timing diagram into a sequence of STG transitions. Basically you need to create a signal transition for each event of the timing diagram and capture the causality between these events by means of directed arcs between signal transitions. Recreate the following STG model in Workcraft.

Start with the set phase of the C-element where out+ event is caused by in1+ and in2+ events:

Capture the reset phase of the C-element as follows:

Now connect the set and reset phases of the specification:

Finally, specify the initial state of the C-element in accordance to the starting point of the timing diagram:

The resulting STG should look as follows; save it as celement.stg.work – this file will be used later on to verify C-element circuit implementations.

Validation and verification of specification

and exercise the obtained STG model. Click one of the enabled signal transitions (they are highlighted in orange) to fire (or execute) it, which changes the state (or marking) of the STG. Note that the sequence of fired transitions is recorded in the simulation trace that is somewhat similar to the original timing diagram. Check that the simulation traces correspond to the intended behaviour of C-element.

. Then use the generator of trace diagram

to convert the STG simulation trace to Digital Timing Diagram model. The produced timing diagram should resemble the initial informal specification and looks as follows (0 or 1 in brackets next to the signal name denotes its initial state).

The visibility and color of signals in the generated timing diagram are defined in Visible and Color columns of the signal state table, at the bottom of Tool controls for STG simulation tool. The order of signal waveforms is also defined in this table by rearranging (drag-and-drop) the signal rows.

Before proceeding to the synthesis of the C-element it is a good idea to verify that its specification meets essential requirements, e.g. that it is consistent, free from deadlocks, input-proper, and output-persistent. These properties can be checked via the Verification menu (see standard verification properties for details). Note that it is possible to check these properties either separately or jointly with a single click.

If the specification violates any of these properties then a trace leading to the problematic state will be reported. This trace can be simulated for better understanding the reported issues and for correcting them in the specification.

The STG specification can now be synthesised into an asynchronous circuit implementation with either MPSat or Petrify back-end via Synthesis menu. Workcraft automatically displays a circuit model derived from the synthesis output. For example, a complex-gate implementation obtained with MPSat (Synthesis→Complex gate [MPSat] menu item) would look as follows: you may get a slightly different synthesis results

The circuit can be subsequently saved in Verilog format via File→Export→Verilog netlist (*.v) menu. Note that complex-gate synthesis does not map gates into a cell library and all internal/output signals are represented by assign statements, as follows:

For the purposes of this exercise let us capture (a slightly modified) C-element schematics manually. By expanding the parentheses one can re-write the equation for signal out as follows:

You may wish to make the circuit schematic more readable by adding joints. Use the following editor features to tidy up C-element schematic:

The improved C-element layout should look as follows:

A similar result can be achieved by using Workcraft automatic wire routing via Tools→Graph layout→Circuit routing only.

and simulate the captured complex gate implementation of the C-element. Ports, pins and wires are colour-coded: blue means low level and red means high level of the signal. Excited ports and gates are highlighted in orange.

Click one of the excited ports or gates to toggle its logical value. Similar to the STG simulation, the sequence of signal events is recorded in the simulation trace and can be subsequently replayed for analysing the circuit's behaviour or converted to a timing diagram for visualisation purpose.

To conduct formal verification the circuit has to be converted into an STG. Normally this is done silently by the tool, but it is possible to view the intermediate circuit-STG via Conversion→Signal Transition Graph. The resulting STG for this circuit is shown below. Note that your layout may be slightly different and that this STG will not be required in the rest of the tutorial.

Note that if the C-element's inputs are not restricted in any way then they can change in an unexpected manner and cause malfunction of the circuit. This can be confirmed by checking the circuit for output persistency Verification→Output persistency [MPSat] – the tool will warn you that the circuit is being verified without no environment STG and produce the following violation traces: 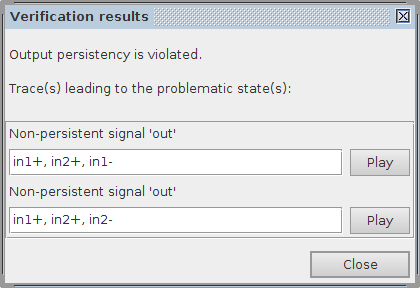 This indicates that output out exhibits non-persistent behaviour. Indeed, after the trace in2+, in1+ the output out is excited and ready to switch to logical 1, however either in1- or in2- would disable it. Play one of the reported traces to simulate this unexpected behaviour.

The circuit behaviour can be restricted by an environment STG as follows:

Large gates like AO222 may not be available in the technology library and thus other implementations of C-element using smaller gates are of interest. However, it is very easy to make a mistake when designing asynchronous circuits, and so any such implementation has to be formally verified against the original STG specification.

When verifying the circuits provided in this section make sure their environment STG is specified and points to a correct C-element specification. This STG file is assumed to be called celement.stg.work, but may be saved under a different name on your computer.

Download the following C-element implementation due to Mayevsky celement-decomposed.circuit.work (4 KiB) and verify that it conforms to the STG specification, is free from deadlocks, input-proper, and output persistent.

Note that the correctness of this implementation depends on the isochronic forks assumption: the difference in arrival times of a signal to the ends of a wire fork is negligible compared to any gate delay. If this assumption is violated, the above implementation can exhibit non-persistent behaviour. Download the following C-element implementation celement-decomposed-hazard.circuit.work (4 KiB) where a delay in a wire fork is made explicit (modelled by a buffer). Formally verify this model, inspect the violation trace, and explain what is going wrong in the circuit.