The selection tool controls provide the means to transform the selected nodes and connections of the model.

Note the difference between groups and pages. Groups are just unnamed decorations for several nodes, while pages are named nodes containing other nodes. The nodes in different groups still should have unique names, while pages provide namespaces for their included nodes. Therefore nodes in different pages can have the same local name, e.g. there may be node n1 in pages p1 and p2 with the full names p1/n1 and p2/n1 respectively.

Usually the event names correspond to the model nodes whose execution changed the state of the model. The sequences of events are recorded in the corresponding columns of the Trace–Branch table. You can click the name of the event in either column to restore the model state just before that event has happened. 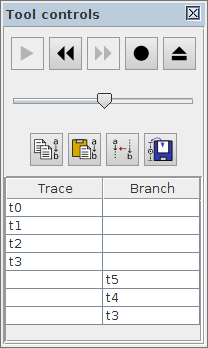 The navigation through the simulation data can be done with the following buttons:

The slide bar under the navigation buttons controls the speed of playback for the existing or randomly generated sequence of events.